estethica carries out nose corrections of all kinds - classical nose surgeries as well as the correction of large and long noses, saddle noses, hump noses or crooked noses and nose corrections without surgery using injection therapies. All operations and therapies are performed by specialized plastic-aesthetic surgeons who are specialized in their respective fields.

ATTENTION: Everyone is unique. This means that the treatment process, planning and outcomes can be different for you. The information you see here is the averages encountered in a large sample size. For details please contact us via WhatsApp: +49 170 5473999

Nose correction with nose surgery is the right choice for all those who are not satisfied with their nose and want a permanently beautiful nose. The operation is performed under general anesthesia and is therefore largely painless. After just one to two weeks, you as a patient will be able to contract again.

The most common corrections of nasal deformities are: 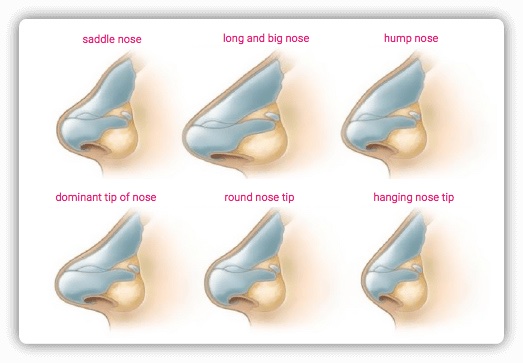 estethica is specialized in operative nose corrections of the externally visible nasal form (rhinoplasty). However, during surgery on the nose, the functional aspects of this organ can never be separated from the aesthetic impression. After all, the nose fulfils a number of important functions: Not only do we smell and breathe with our nose, the organ cleans and warms our breath, protecting our mouth and respiratory tract from infection and dehydration.

Risks of a nose operation

Surgical nose corrections usually proceed without complications. After surgery, some patients complain of numbness of the nose, cheek and upper lip. Conversely, hypersensitivity to touch may occur in these areas. However, these after-effects usually subside by themselves within a few weeks after the operation.

Complications such as bleeding, infections or an impairment of nerve tracts are mentioned in the literature as possible side effects, but in practice they hardly ever occur or can be treated directly in the clinic without any problems, so that no late effects are to be expected.

Patients with very coarse-pored and thick skin may experience complications if the skin does not stretch or contract as desired. In rare cases, a subsequent correction may be necessary.

Whether the nose correction is to be performed with or without surgery can only be decided individually. If only small differences can be compensated for, for example in a crooked or crooked nose, a harmonious nasal appearance can often be achieved with the help of fillers such as hyaluronic acid, calcium hydroxyapatite or autologous fat.

Such injection therapies are minimally invasive treatments with corresponding advantages:

A disadvantage of injection therapies, however, is that the results are only of limited duration. Since the injection substance is degraded by the body, the Results of nose correction without surgery (depending on the chosen filler) usually only received between 6 and 18 months. The treatment must then be renewed. It is also possible to choose the injection therapy first as a test for a then permanent nasal surgery.

In our modern and well-equipped beauty clinics in Istanbul you will find we perform all types of nose corrections - both with and without surgery. Whether you want to reduce the size of your nose, get rid of unattractive humps, have a saddle nose, crooked nose or an oversized nose tip corrected: A health trip to estethica will give you a perfect nose.

All nose corrections are carried out by experienced plastic-aesthetic surgeons. Therefore, we can offer you both complex nose surgeries, the execution of which requires high precision as well as a great deal of sensitivity and empathy from the surgeon, and nose corrections without surgery - such as injection therapies with fillers such as hyaluron. Our doctors and surgeons will advise you in detail on the most suitable therapy for your needs.